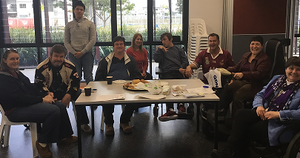 A new Local Support Group based in Fitzgibbon (northern suburbs Brisbane) kicked off in July, after an initial Community Conversation hosted by Queenslanders Disability Network (QDN).

Convened by QDN members Meriel Stanger and Bernadette Scalora, the first meeting was attended by people living with disability looking to learn more about the National Disability Insurance Scheme (NDIS), as well as sharing information and experiences around matters of interest such as the accessibility of transport, venues and public spaces in the northern suburbs and beyond.

This first meeting gauged participants’ current level of knowledge around the rollout of the NDIS, establishing some of the topics for learning/discussion for future meetings.  The group also agreed on a suitable time for future meetings going forward.

To start exploring the NDIS the August meeting will provide ‘An introduction to the NDIS’, co-presented by Co-Convenor Bernadette Scalora and Judy Trussler, Manager of a local service provider Qualtime.

Early feedback from group participants is that they are excited about this new local support group in Fitzgibbon. Mark, a group member, says:

"With the NDIS coming groups like these will become more important. I am proud to be part of the formation of this local support group."

Another new member also shared that “he is looking forward to growing the group and sharing information.”

The Fitzgibbon Local Support Group will be meeting on the second Tuesday of the month at the Fitzgibbon Community Centre from 12:30pm to 2:30pm.  If you are interested in being part of this exciting new group contact QDN at dso@qdn.org.auor phone 1300 363 783