When a first meeting is really successful 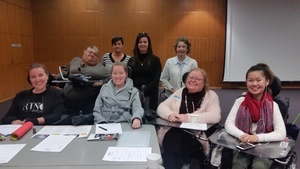 Group attendance sometimes relies on momentum, but in this case the first meeting welcomed 8 new members.

Carolyn Campbell-McLean, the PDCN Community Connector recruited the group through her own personal networks with the assistance of PDCN. The group met for the first time at the Blacktown Library Function Centre.

Carolyn says that “They want to meet regularly with some time to discuss hot topics/questions and NDIS stuff.”

“Participants liked the idea of using the group as a problem-solving space and having different monthly topics each time. Another idea was to go to the Independent Living Centre together, just a few hundred metres away from the venue.”

“The people “clicked” and had much in common, although they are all at different stages in getting carers and transport so there was a lot of valuable sharing going on.”

“One participant was extremely proud of herself for travelling independently to the group by taxi instead of relying on a carer/driver. Another participant was accompanied by a support worker to her first outing without family. They both commented that the group is an opportunity to increase independence and confidence in accessing the community.”

This message via Facebook was received after the meeting:

”Thanks so much for today is was lovely! I came home and raved about it for nearly an hour. Hopefully next month if everyone is ok with it, I can bring someone else. He said he would love to come once or twice and learn new things/meet people!”